Waypoint’s Kingpin™ is a simple but powerful device that enables Waypoint’s industrial strength, omnidirectional AMRs to load and unload payloads AND connect to a variety of standard carts offering the ultimate flexibility for material movement. Kingpin™ enables Vector to do two critical jobs with one simple top module, as opposed to having to choose from one task or another. With Kingpin™, Vector can automatically pick up a tote on one side of the factory, deliver it to the other side of the factory, and connect to a cart on the way back to the starting point. With Kingpin™ you get both at once - automatic loading and unloading, as well as the ability to connect to common carts used in factories and warehouses. Waypoint’s Kingpin™ combined with Vector – 600 lb payload capacity or MAV3K – 3000 lb payload capacity, offer customers unrivaled autonomous navigation, omnidirectional movement, 3D perception, and 360 deg. safety lasers. Waypoint Robotics’ Dispatcher software for robot setup and management makes Vector, MAV3K, and Kingpin™ easy to use for the workers who are on the job today. And now with their ability to pull carts as well as load and unload materials, they are an even more powerful tool for workers who want to get more done and go home with more energy at the end of the day.

Waypoint’s Kingpin™ is the first of its kind dual-use top module that enables Vector and MAV3K AMRs to automatically load and unload payloads as well as hitch onto carts of all sizes. Now you don’t have to dedicate a robot for one task or another, with Kingpin™ you can do both.

Waypoint’s Kingpin™ enables workers to have their Waypoint AMRs autonomously load and unload materials and/or autonomously connect to common carts in factories and warehouses, allowing them to focus more on work that matters and avoid the heavy lifting. 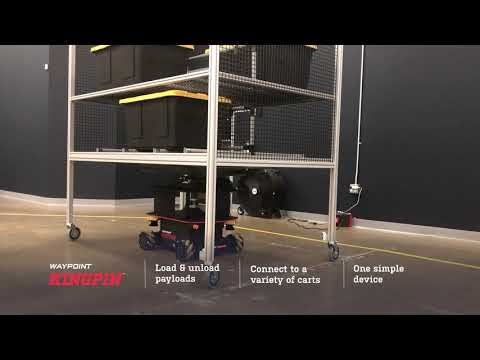